OPENCOIL is an exhibition that operates within micro-mobility services in urban space by using the decentralized infrastructure of e-scooters for displaying art, while also addressing the conditions and effects of this infrastructure. 10 artists present their works on a small Wifi controller with ~2MB offline memory, which are connected to 10 randomly-selected e-scooters in Berlin. As soon as the scooters are rented, visitors get access to the exhibition via their smartphones. If connected to the local unencrypted WiFi network sent by the Wifi chip, a web portal opens automatically, where the works can be viewed. The current locations of the artworks can be followed at Haus der Statistik, as well as on this website: https://opencoil.show/# (https://opencoil.show/)

OPENCOIL is not only a pandemic suitable way to show art in public offline space, the exhibition is also a creative (re-)use of e-scooters: an attempt to approach them through artistic intervention. The presented works deal with questions of the overlap between public and private space, the employment of resources, as well as greenwashing, venture capitalism, and vandalism. All works have been optimized by the artists for mobile viewing.

Florian Tscharf presents at Zentrum für Netzkunst his work Whois 100 and the idea of “collecting collectors” by which he questions the prevailing power structures of the art market.

Florian Tscharf (*1987) is a Berlin based video and media artist. He studied Media Design in Ravensburg, Directing at the Baden-Württemberg Film Academy and Screen Based Arts at the Bezalel Academy in Jerusalem.

We are excited to see you all there!

Zentrum für Netzkunst is open every Thursday and Friday 2pm – 6pm in August. We have a selection of books on internet art, a research terminal including interviews with some exciting artists and people who like to talk about internet! (Also some stickers left.) Come say Hallo and have a look in Haus der Statistik (Otto-Braun-Str. 70-72, Haus D)!

Nadja Buttendorf (1984) questions current norms and codes of gender constructions and value creation mechanisms of the human body in our digital society. Her works make it clear that our understanding of technology is also linked to patriarchal power relations. Her interactive works and video projects, on the other hand, draw multi-layered new narratives in which women become visible again as an elementary part of the history of technology. She extracts communicative moments of participation in the Internet both in her performative jewelry objects and in her tutorial workshops. DIY, as a widespread online aesthetic, is used specifically as a strategy of access and rejection of neoliberal work ethics.

Works and workshops by Nadja Buttendorf have been shown at the HKW Berlin, the Hartware MedienKunstVerein Dortmund, Künstlerhaus Bremen, LaGaîtéLyrique Paris, the MU Eindhoven, the NRW-Forum Düsseldorf, Halle 14 – Zentrum für zeitgenössische Kunst Leipzig, the D21 Leipzig and the panke.gallery Berlin. She has also given lecture performances at Re:publica, the CCC, Creamcake and the nGbK Berlin. Nadja Buttendorf is a trained goldsmith and studied fine arts at the Burg Giebichenstein Kunsthochschule Halle (Saale

In April 2020 metazoa.org was invited to spend 14 days at Telegram Residency organised by Netart.Berlin. One of the output was an Telegram bot to generate endless Sticker sets based on DCGAN trained on human faces and emojis. 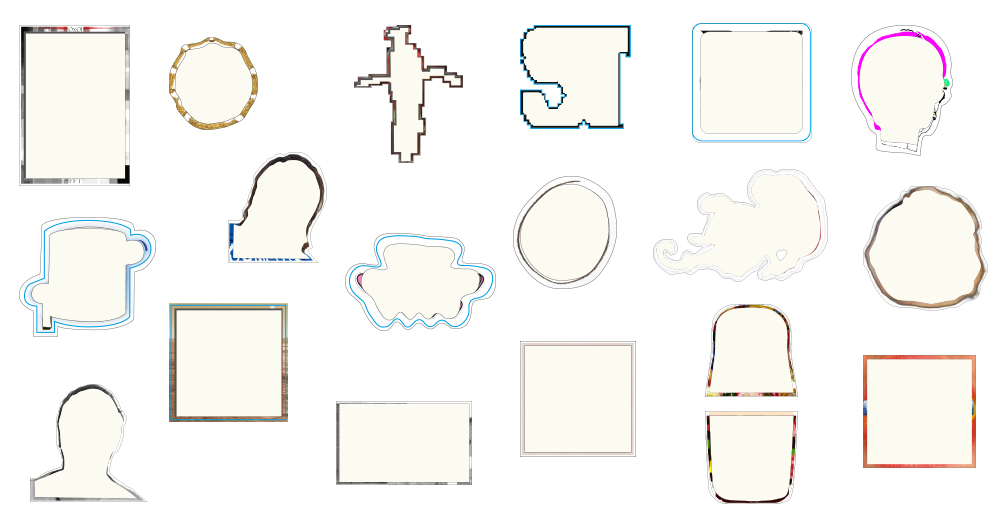 stick.t.me presents stickers and sticker sets that have been produced by 19 different artists and collectives who have participated in the online artist-in-residency program organized by the Zentrum für Netzkunst on the Telegram messenger app. The sets can be collected online on Telegram or offline in a limited-edition scrapbook available at panke.gallery.

Location
panke.gallery
Gerichtsstraße 23 – do to the yard construction please enter the gallery from the panke river side!
Hof 5
13347 Berlin

Immediacy, the mother of immersion, is so tempting to achieve and to be part of, also or maybe first and foremost in messengers. It’s tempting to make immediate connections, ask and answer questions with one tap, to have a dialog without talking.Form that once followed function in the world of consumer electronics was reassigned to follow emotion*. Emotions got channeled into emojis. Emoji, an ultimate form of immediacy, emancipated, giving life to new genres whose function is to immerse users in generating (or picking from) sets of personal preferences, cultural references and insider jokes. In a messeger’s STICKERS menu, you are entering fractal dimension, opening a Russian Doll.Matreshka sticker set is your path throurh the world of endless possibilities, greetings, reactions, questions and answers, that will always match.

Carla Gannis is an interdisciplinary artist based in Brooklyn, New York. She produces virtual and physical works that are darkly comical in their contemplation of human, earthly and cosmological conditions. Gannis’s work has appeared in exhibitions and projects across the globe. Recent projects include “Portraits in Landscape,” Midnight Moment, Times Square Arts, NY and “Sunrise/Sunset,” Whitney Museum of American Art, Artport. Publications who have featured Gannis’s work include Hyperallergic, The Wall Street Journal, The New York Times, El PaÍs and The LA Times, among others.

*Canadian artist, who has actively exhibited her work in both solo and group exhibitions since the early 1990’s, both in Canada and Internationally. Her practice has included obsessive Ilfochrome printing, obsessive painting, obsessive super 8 film & video, and obsessive on-line animated GIFs incorporated into restrained off-line installation work. Recent exhibitions include “Abrupt Diplomat” at the Marshal McLuhan Salon for Transmediale, “At Play in the Fields of the Lord” at Transfer Gallery, Brooklyn NY and “DKRM” at DAM Gallery, Berlin. Mills has also co-curated monthly group GIF projections, with Rea McNamara, for the “Sheroes” performance series in Toronto, a group GIF projection event “When Analog Was Periodical” in Berlin with Anthony Antonellis, and a four person GIF installation, “:::Zip The Bright:::” at Trinity Square Video in Toronto, with Sara Ludy, Nicolas Sassoon and Rick Silva. Lorna Mills‘ most recent curation project, “Ways of Something” is a collaborative remake of the 1972 John Berger documentary “Ways of Seeing” episodes one through four, featuring 113 networked artists. (quoted from http://methodsofart.net/artist/lorna-mills/)

As an starting point we choosed to port our older (2011) work [Generation of Princesses](https://generaceprincezen.cz) to inline bot for generating a specific sticker set (https://t.me/addstickers/GPv1_by_mtzgpbot). During the residency it was possible to all Telegram users to spread this set by using @mtzgpbot. The set reached its end in 120 stickers.

Generation of Princesses grew up from our skepticism of massive image producing on one hand and from the lust of human being to see and emotionally engage the image of face in almost anything which contains three separated spots on the other.

It seems to be the trademark of man throughout his history (totems, masks, portraits, goddess, icons, idols, end emoji), it is a first thing the newborn is going to learn. Almost everything you want to sell to a human being has to have a face, a show on site, a distinguishable expression (car, movie, computer, artist).

We see the Generation of Princesses with its teenage look, pattern-driven logic, self-identification moment, algorithmic encapsulation and ability of producing bunch of outputs actualise itself in an incoming era of AI produced images and as such it make sense for us to introduce it again in the form of Telegram bot.

With the typical self-irony, as the second set we have made almost endless line* of hybrids between human faces and emojis and named it as Generation of Bastards. By training the DCGAN (Deep Convolutional Generative Adversarial Network) on extracts from [UTKFace](https://susanqq.github.io/UTKFace/) and [emoji-data](https://github.com/iamcal/emoji-data) we have got the [model](https://metazoa.org/netart-berlin-telegram-residency-2020/generator-of-bastards.hdf5) for another Telegram bot @mtzaibot. This bot will remain active for some time.

In this case we were interested not only to produce, even low-res, AI generated stickers. After all, the core concept remained the same as before, three dots in colored blob as emotionally tinged face. The main direction was to take advantage of the residency to deeply explore pitfalls of training AI in general. To explore its exclusiveness in the sense of knowledge, emic, time and for sure a technical equipment. We would rather be able to bring some new and shocking ideas, but please wait…

In puting preloaders in the place of emoticons we try to point up, that the most emotional moments we experience in the front of a computer may be watching the loading bar or the spinning preloader until expected content is prepared.

This forced waiting moments are the very rare moments in the interaction with computer, where we have time to observe our emotions and their origins. And maybe decide to not to load what we thought we would like to load before.

Barbora Trnková, together with Tomáš Javůrek, forms the Czech artistic duo working under the common pseudonym & on the metazoa.org domain. Together they create web applications, wifi installations, mobile applications as artworks. They explore – with their own sense of ontologically or tautologically based philosophy, intimacy and subtle humor – the possibilities of technologies as an interface om on which inhuman actors meet through human actors.
In 2012, they established and run ScreenSaverGallery, an online exhibition project accessible as a screensaver on a user’s personal computer. At present, both of them work as doctoral Candidates at the Faculty of Fine Arts in Brno University of Technology, which they completed in their previous studies. At the same time, Tomáš Javůrek is an assistant at the Photography Studio at FaVU and also works as an assistant professor at the Department of Intermedia at the Academy of Fine Arts and Design in Bratislava. They recently opened a discussion about big data and art in Czech republic with the ongoing project Datatata (https://datatata.info/).